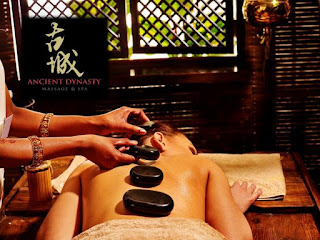 The Ancient Dynasty Massage and Spa has 2 outlets which are located in Siglap and Upper The . However, we have chosen the Upper Thompson outlet and concluded that the outlet has 9 single rooms each with a single bed. We had decided to choose the 2nd outlet instead as the receptionist had recommended to us that it would be better since we were going as a group.


We felt that, the spa concept’s name, Ancient Dynasty Massage & Spa, did not portray its name out in its treatments as we feel that there is no brand positioning in its treatments. For example, their spa menu offers Swedish Oil Massage and Shiatsu Massage, however, these types of massages does not represent their brand’s name. This implies to us that their Chinese spa concept selling is lacking.


The design for the website is user-friendly as it is easy to navigate around. There are no spa jargons being used throughout the website so that we are able understand it simply in order to avoid any confusion. They also have main heading tabs such as Services, Price & Promotions and Contact Details for the customer’s convenience. However, we feel that the website can be further improved on such as rearranging and redesigning the layout, updating the menu and adding in new treatments that they not have previously. They also do have a Testimonial Review on their Homepage for customers to read reviews about their spa, their service quality of their treatments.


We felt that their marketing media platform could be better as they do have a website, a Facebook page and Google+. However, they could also reconsider having Instagram as it is trendy now and this would be more beneficial since they can show off pictures of their spas and have customers review and tag them on it and on their page vice versa. Their website design is good and simple but it can be further improved on such as rearranging and redesigning the layout, updating the menu and adding in new treatments that they not have previously. They also do have a Testimonial Review on their Homepage for customers to read reviews about their spa, their service quality of their treatments.


During our phone conversation with the receptionist, we came to an understanding that the recommendations of massages will only be done when we were in the spa shop. This is due to the fact that everyone has different skin types and have different levels of tolerance for the massage’s pressure points for different treatments.


Before entering the Ancient Dynasty, the exterior design of the outlet provided furnitures such as having benches placed outside for the customers to sit and relax. The interior design of the spa supports the spa’s concept as there are wooden decoration such as Chinese art decoration as well as the red lanterns. In addition, the lemongrass scent sticks was placed at the lounge area right beside the indoor mini water fountain to indulge us by our five senses as the smell of the lemongrass scent sticks gave us a refreshing smell. However, there was no music being played in the background and with this, they could have a small CD player hidden behind the receptionist’s desk to play soothing music to get their customers in the mood. The lightings in the treatment rooms were dim to make us feel in tune with the relaxing atmosphere. This can be used to enhance the interior design of the treatment rooms, giving us a sense of relaxation when we are inside. Hence, this gives us a holistic feeling that our mind and soul are at an equilibrium point. 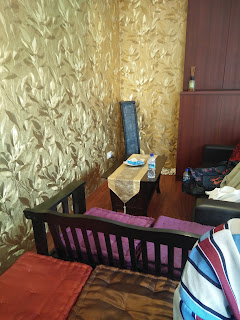 During the check-in process, we have learnt that the receptionist, Miss Tay, is a very customer-friendly staff. She was confident and knowledgeable in terms of explaining to us about the different types of massage treatments as the spa menu does not have any description about it. Based on the massages available and the suited pressure points applied for each of the massages respectively, she made recommendations for all of us based on her experience and knowledge. The whole process of the check-in has been very smooth in terms of the check-in flow. Not only that, she is bilingual as she can communicate to both english and chinese-speaking customers.


There were a range of spa treatments available to cater to our needs. After the receptionist had explained to us about the different spa treatments, the 3 of us (Ariel, Kai Jie and Kelvin) had decided to take Deep Tissue Massage while the other 2 (Denna and Lydia) chose Swedish Oil Massage. She had also asked the ladies personally if whether they were on their period as one of our group mates were on her period. Thus, she recommended her to try Swedish Oil Massage instead.

We feel that their spa menu can be further improved on as it is lacking in choices and varieties of treatments to choose from, for example, their treatment names could be rename to Yin & Yang Massage or Chinese Healing Massage to represent their brand. In addition, their retail services were good as there were a variety of ala-carte and top-up options for us to choose from so that aspect is good as it allows us to choose and combine with our massage treatments which makes it our own DIY personalised package cheaper rather than doing it ala-carte. Moreover, we felt that the spa menu is lacking with information as there is no short descriptions about each massage treatment especially for first-timer like us.

The prices of the treatments were affordable and reasonable and we were also given the chance to create our own DIY spa package. This made us feel that it was more worthwhile it since we felt that the value of the products has increased along with the affordable price value. Therefore, this had left a lasting first impression on us. The spa has regular spa promotions to help attract more customers based on festive seasons such as a Christmas Spa Menu and National Day Menu  which is at a lower price compared to their normal menu. For midnight, they have a promotion where it is cheaper based on $38 per hour rather than the usual $42. This helps to attract a wider market such as the working adults, neighbourhood area to increase revenue by catering to the customer's lifestyles.

However, the Christmas spa menu date’s promotion did not match with the promotion start date on the spa menu as we had the promotion prices before its official start date. It stated that it would be applicable on the 31st November, however, this was not applied to us.


After we had decided on our massages, we made payment accordingly and the receptionist brought us to our respective treatment rooms. Upon entering the treatment room, we were told to take off our clothes and change into the disposable garments. Air-conditioning units were also individually installed in each room to accommodate to the guest’s needs.

Comfort
In terms of comfort, the therapists would knock the door to check if we are done changing out before they could come in and start the massage session. The therapists did asked us if the pressure of the massage that they were applying were too strong and would adjust their pressure in order to avoid any feelings of discomfort. The temperature of the treatment rooms is also at the suitable temperature where it was not too cold or too hot inside.

Safety
There are lockers provided with the key attached to a hairband for us to keep our personal belongings inside our own treatment rooms. Inside each treatment rooms, they have placed a sign, indicating no sexual activities are allowed in the room so as to ensure that none of these inappropriate behaviours happen.

However, we think that bathrobes should be provided as we felt uncomfortable wearing the undergarments since we were first-timers. This could be taken into consideration as there could be a scenario whereby we might need to use the restroom after changing into the undergarments. This will also be more convenient for the guests to go to the restroom with bathrobes provided.

CleanlinessThe cleanliness of the toilet was very clean. They also provided disposable undergarments for the guests to use but they did not provide any bins inside the treatment rooms for us to disposable these items as it is not hygienic. However, the slippers are being shared amongst the customers and this is not hygienic. Hence,  we would recommend them to use disposable slippers instead for hygiene purpose.

As a group we felt that, should be standardisation when providing the treatments. The therapists should have a set of standard questions to ask the customers in order to provide a comfortable massage and to ensure their satisfaction. After the massage treatments, they had provided us with a choice of water or ginger tea. We were told that ginger tea is good as it allow the detoxicity in the body to be released and flushed out.

Overall, to sum it up, these are my group’s suggestions and recommendations for the spa as we feel that there are more rooms for improvement based on our observance, experience and judgement when we were there. Not only that but it will also help to improve on the spa’s corporate image and its profitability as well.

Posted by AncientDynastySpaReviews at 05:12 60 comments: